he 20th International Economic Forum opened June 16 in St Petersburg. If the St Petersburg forum hadn’t played a dirty trick on me, I would probably never pay any attention to this forum.

I suppose that most readers can’t even imagine how this forum is conducted and probably aren’t interested either.

However, I am going to share some insider information due to the fact that I’ve been a participant of this forum since the first time it began June 18 1997.

After the guys from St Petersburg came to power, the forum was transformed from a provincial unnoticeable inter-CIS get-together into the so-called “Russian Davos”. In part, this is correct because the Davos format means an absolutely informal discussion between heads of state, businessmen, economists and politicians; as well as the opportunity to serenely pass the time resting in the mountains or drinking heavily, depending on your preference.

For Russia, the economic forum represented a chance to stand up and be noticed. Even thought it turned into a Stalinist-style People’s Exhibition, it represented a real chance for many businessmen to see Putin in the flesh and to try and tell him their hopes and aspirations, and their future projects.

However such things in Russia don’t last long and are soon commercialised. Within a short space of time, almost everything was commercialised. Participants were not only expected to pay an entry fee for taking part in the forum, but then each second of the time there was to be paid for according to a tariff. They would even have to pay according to whether the head of state would grace the businessmen with his presence, and if he did, then for how many seconds he would remain at the businessman’s stand. There was a tariff for whether he would pay deliberate attention or just ask you “what are your difficulties my friend?”, and then for whether you could take a photo with him or not.

In my memory all of the above was sold by 2010. Very often even the most paradoxical things occurred. If the planned for visitation did not happen, then very often the money was returned.

By 2010 real businessmen had lost interest in the forum. Participants took part as if collecting for military duty. The administration made it compulsory for the biggest Russian state and private companies to take part in the forum. Because of the lack of real business they decided to pull in the regions too. Governors languished for hours beneath their childishly-built models of grandiose building plans in hopes of subsidies.

By now the forum has turned into some kind of wandering circus between Sochi and St Petersburg.

In recent years they’ve even stopped changing the decorations. Instead there is the same old depressing picture of the by now weather-beaten stands under the name of “Gazprom”, Sberbank, VTB and Russian Railways. The circle of participants has narrowed so much that there isn’t even any excitement over whether there will be a meeting with the head of state. Almost all of the participants are able to speak with him from time to time. I remember very well how surprised I was by how disinterested Putin and Medvedev were in spending several hours speaking with the Russian business elite.

Due to my relations with Putin, I discussed with him several times his lack of desire to understand and experience in the flesh how the real economy lives. The last time I was at the forum, the situation had reached the absurd. There was the half-empty exhibition hall, encircled three times by OMON special forces who had cleared the entire north-west of the city and forbidden the inhabitants of the closest homes to go onto the street.

Even the so-called “walkabout” of the head of state accompanied by honoured guests and a countless number of guards took place in a half empty exhibition hall. He would stop every now and then at some of the stands and condescendingly pat on the back some of his old friends, promising to meet them in the near future to discuss their problems. After all this, there would be the same old phrases intoned year after year on the investment climate and Russia’s imminent economic breakthrough in the presence of the same old close foreign guests like Schroeder and Berlusconi. In recent years even delegations from African and Asian countries paid attention to the St Petersburg Davos, in hopes of increasing trade flows.

For the United Industrial Corporation, or OPK, where I was a shareholder, the economic forum had an absolutely practical significance. OPK was perhaps the biggest private industrial corporation producing real goods, extracting raw materials, and owning huge parcels of lands with architecture that one could be really proud of.

Against the backdrop of fading slogans such as “Gazprom – Russia’s achievement”, OPK looked phenomenal. There were real people representing absolutely different sectors of the economy who felt inspired because they were making their dreams reality. It is difficult to imagine the feeling of a person managing thousands of likeminded people who had been able to build, for example, the biggest nuclear icebreaker in the world, to design and create the first floating nuclear power station in the world, and to explore the biggest coking coal field in the world and to bring it to production within 15 years. These people had begun to sell not only coking coal to developing countries, but also ships for exploring the Arctic shelf to Norway. They’d also begun to build a hotel on Red Square that was beyond any definition by number of stars. They were using the most advanced global technologies to preserve its historic appearance. And then there was the project we had to produce artificial blood. This was valued at $3.5bn! It was stunning. Everyone at the forum visited the OPK stand. President Medvedev did not tire of bringing to the OPK stand heads of state who were visiting the forum despite the global economic crisis. I found a film of all this taken by a TV group. It was a real economic miracle that was underpinned by billions of dollars in orders for many years to come. Clearly its success at the forum is what destroyed it. Immediately after the St Pete forum, an unprecedented attack to expropriate all my assets began. Unfortunately today nothing remains of what was created over decades. And the state which took this countless wealth for nothing was not only not able to grow it, it was not even able to preserve it. Today, the business empire I described is practically in ruins. Workers are not paid their wages and thousands are losing their jobs.

Pay a few minutes of your time to see how it was. I fear that we will never witness a return to those golden times. 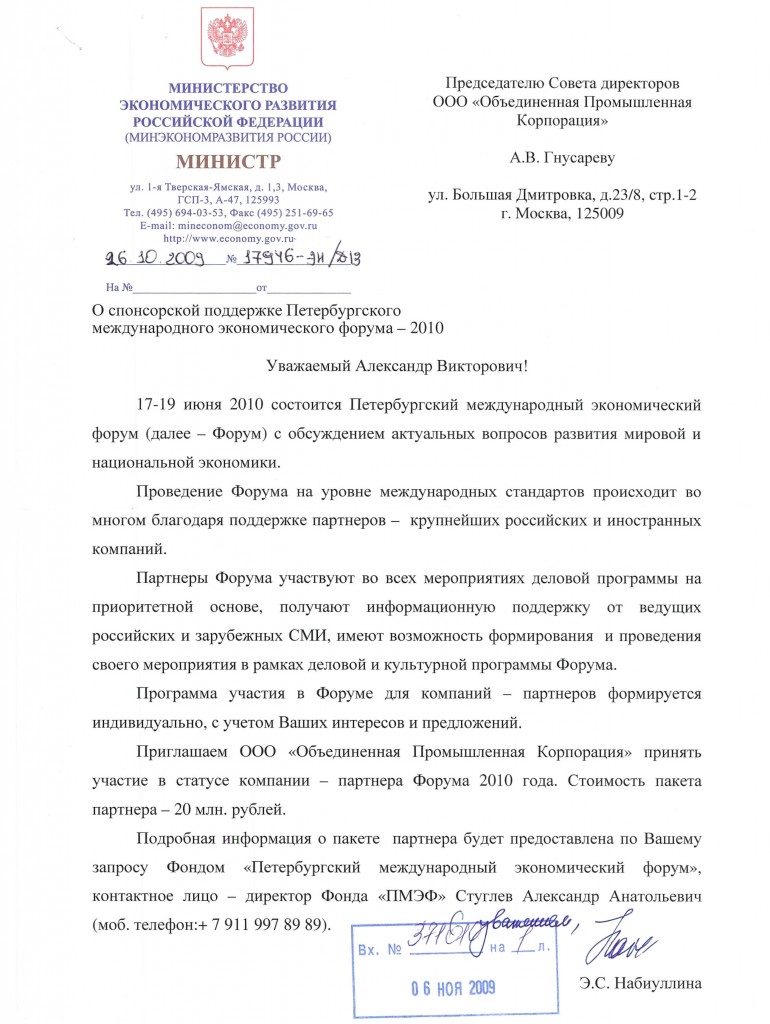