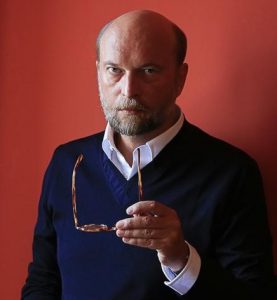 Serge Pugachev, French citizen ( he renounced his Russian citizenship in 2012) is an international investor, public person, politician, and a citizen of France. He holds a PhD in Engineering, is a full member of the International Engineering Academy and has published three monographs and 40 research papers.

Starting from the late 80s he has been actively involved in international business, leading major projects in the USA, France, Luxembourg, Russia and Great Britain.

In the 90s, he was part of the closest circle of Russia’s first President Boris Yeltsin, and one of his election campaign directors in 1996. In June 1996 he was officially awarded a Certificate of Acknowledgement by President Yeltsin “For his substatial contribution to the establishment of Russian democracy and his participation in preparing and conducting the national election campaign during the presidential election of 1996”.  “Spinning Boris watch movie”

Serge Pugachev has for a long time been listed among the top 5 most powerful people in Russia, together with the Head of the President’s Administration and the Head of the Central Bank of Russia.

Having had friendly relations with Vladimir Putin from the early 90s, he was one of those who brought the latter to power in 1999. In 1999-2000 Serge Pugachev was one of the leaders of Putin’s political campaign staff.

From the early 2000s, he was a member of the Franco-Russian government commission.

On 24 December 2001 he was elected Senator of the Russian Federation, and has served in that capacity for 10 years, until 4 January 2011.

Between 2010 and 2014 all of Senator Pugachev’s assets in Russia were expropriated, and he himself was subjected to persecution on political grounds.

Serge Pugachev was born on 4 February 1963 into a military family.

His grandfather on his paternal side (Fyodor Kuzmich Pugachev, born 1892) was an officer of the imperial Russian army, who fought in the First World War from 1914 to 1917 as Staff Officer of the 4th Nesvizhsky Grenadier Regiment of Field Marshal Prince Barclay de Tolly.

Under the Soviet regime he held command positions in the Red Army. As of July 1918 he was Commander of the 1st Don Soviet Infantry Division, leading his troops against the forces of General Krasnov on the northern side of the Tsaritsyn front. Awarded the Order of the Military Red Banner.

He did not join the Communist Party. He later held command positions in the Red Army. He was arrested during the 1930s. On 19 November 1941, he was appointed Commander of the 22nd Separate Infantry Brigade in the Second Army of the Volkhov Front. He fell on 25 June 1942 near Myasnoi Bor.

Serge Pugachev’s grandfather on the maternal side (Konstantin Timofeevich Klochkov, born 1906) had held command positions in the Red Army, including that of Commissar of the 60th Guards’ Regiment of the 20th Guards’ Infantry Division. He fell on 9 September 1942.

Serge Pugachev’s father, Viktor Fyodorovich Pugachev (born 29 May 1930), matriculated in 1943 as First Year student in the first intake of the Kiev Suvorov Military School. Commander of the Order of the Red Star. He has held command positions in airborne troops and from 1973 was Commander in Chief of the 21st Airborne Infantry Brigade. He retired as Deputy Chair of the Faculty of general tactics and operational art of the Military Academy. He died in France in 2010.

Sergei Viktorovich is Pugachev divorced, with two adult sons from his marriage with Galina Pugacheva and three children from British citizen Alexandra Tolstoy (daughter of the British historian and politician Nikolai Tolstoy). He has five grandchildren.